Potato Varieties
- The Choice Is Yours - * Discover the huge variety of potatoes available to grow,
* Select your favourite spud for growing, cooking, eating...
* Get the most productive varieties for your garden soil,


Many of you are amazed at discovering the vast range of potato varieties available to grow at home. And potatoes, now available in smaller packs too, are certainly a choice crop for space in your organic kitchen garden - so in 2010 for example - I grew 6 different potato varieties - and I've grown several varieties every year since.

Photo of 6 Varieties from
my 2010 organic garden 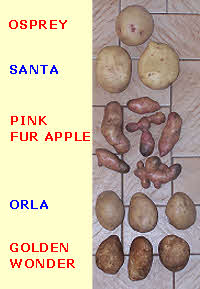 The range of potato varieties for home growing is superb!
In 2011 year I grew:
'Sarpo Mira' 'Swift' 'Elizabeth' 'Pink Fur Apple' and a purple coloured variety
Seed potato stocks are limited - so buy early to secure your select varieties.

Your nationality/region For the most useful
page links please select...
THE CHOICE IS YOURS WITH HOME GROWN POTATOES:

Note: the current availability of potato varieties in smaller packs is great value for home growers. This meant I could sample 6 different varieties in 2010.

But you can still get the standard packs to grow for the family on an allotment or community garden. Choose seed potato varieties here.

Orla: - First Early   Blight resistance made this a good choice to grow in potato tubs for my 2010 organic garden.

Osprey: - Second Early   Has attractive purple blushed eyes similar to 'Kestrel' which is its parent.

Santa: - Early Maincrop   Has double eelworm resistance and I harvested a good crop. Uncovering the large flattened white tubers (with yellow flesh) was like finding Christmas presents that wait to be unwrapped.

Valor: - Late Maincrop   Good resistance to tuber blight for storage purposes. Said to be high yielding on poorer soils. You might try it on less fertile sandy soils or, like me in 2010, on new ground.

Pink Fir Apple: - Late Maincrop   I've been told that it's slow and blight can be a problem. But I had no problem growing it. The tubers poked up at me as if asking to be picked. I have to learn more about cooking Pink Fir Apple but the nutty flavour is supposed to be the best of all.

Compare with Anya from Pink Fir Apple X Desiree. Another pleasant nutty flavoured variety but a second early and is easier to grow.

Golden Wonder: - Late Maincrop   Good for flavour and even better after storing. A very big plant and very thirsty so it will need the maximum row spacing. Alan Romans records only low yields and indeed my tubers were smaller than expected. But I won't be using my store of Golden Wonder until January.

Kestrel: - Second Early   An attractive pink eyed tuber good for garden shows. Second earlies are useful because they take up less space than maincrop while keeping longer than earlies. Resistance to Blackleg may make this cultivar suitable for damper colder soils.
International Kidney: - Early Maincrop   Provides beautiful kidney shaped tubers for cooking 'new' when small. Larger tubers too - have a lovely buttery flavour and make good mash. International Kidney is grown to produce the well-known 'Royal Jersey Potatoes' that come from a few specially cultivated fields on the channel island of Jersey.

Lady Christl:  First Early   Took a very long time to chit and may need a short warm period to spur into growth. A start before Christmas is not too early for this one. Mine were overtaken by second earlies but once they got going they did well. Susceptible to folia blight.

Cara:  Late Maincrop   Pink blotched tubers have a waxy moist texture, delivered in high yields, with disease resistance. They keep well too. Most of all the taste was outstanding and I wish I'd grown more of this late cropper.

Desiree: - Early Maincrop   Provides a good crop, grows in dryer soils, and is very versatile for cooking. Not a variety for sandy, gravely or limey soils and susceptible to common scab. Try Romano instead.

Red Duke of York: - Early   Good to grow early in potato barrels to miss the blight. But although I started mine later I got a nice crop of good flavoured oval tubers. Don't overcook.

Home Guard: - Early   Grow them early and eat them fresh as it doesn't keep well. I added plenty of garden compost and got a good crop. The plant doesn't take up too much room so it's ideal for container growing. Get seed potatoes growing in your garden this year.

Potato varieties are rated from waxy textured to floury textured on a scale from 1 to 9. They are also classed by their shape round to oval.

Shape and size of the potato tuber, and the thickness of the skin are also important. Long oval tubers are well made for chipping. Large tubers and a thick skin help to make a crisp baked potato.

Small sized and finger potatoes won't be peeled and might be just right for potato wedges, frying and grilling.

Also the quality of the potato changes from being 'New' to being 'Old', so you can cook the same variety different ways depending on its age.

...I didn’t mention Shepherd’s Pie, vegetable burger, hash browns, stew… this is what organic growing is about!! ...how do you like your spuds?

Seed potatoes come from limited stocks. Top potato varieties sell out quick and 2011 looks like the busiest yet for potato garden sales. So buy early to be sure of getting your favourite home-grown spud.

There's more here on how Certified Seed Potatoes - are produced and the dangers of planting culinary potatoes or re-planting old spuds? find out here.


^ Find the top for Potato Varieties