How To Use A Potato Planter
* For growing on small spaces & hard surfaces,
* For the earliest and the latest crop,
* For cleaner potatoes. 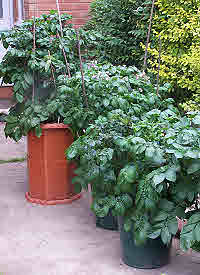 POTATOES IN DEPTH
Uncovering the top
of my potato barrel crop. 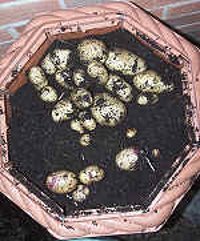 BOTTOM OF THE POTATO BARREL SLIDES UP.
"Red Duke of York" grows well in containers. 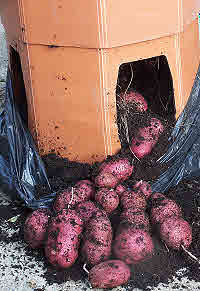 The plastic sheet was used merely to contain the soil. 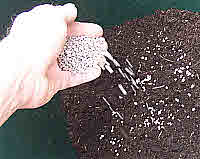 PLANT 4 OR 5 TUBERS PER CONTAINER 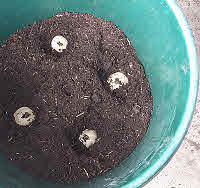 YOUNG POTATO PLANTS
Fill your tub with compost as they grow. 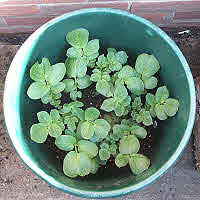 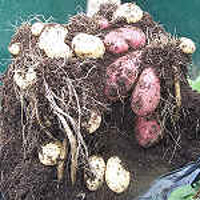 Note: 4 or 5 plants will fit in one of these tubs. 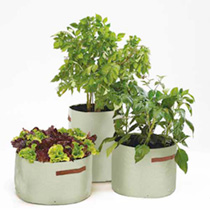 Wrap around potato tubs, potato barrels, and bags, all fit coveniently and neatly on hard surfaces that are open to full light. Try them on your patio, in your back yard, or even on a balcony. They give you a convenient way to harvest your own fresh spuds.

Below you'll discover how you can grow the earliest potatoes for summer salads as well as freshly picked 'new' potatoes to roast and eat for Christmas dinner.

Advantages of a Potato Planter For Organic Gardeners

How to Grow the Earliest Potatoes

Work out how many bags of compost you need because this seasonal stuff may sell out before you've filled the bins,

Note:- you can mix proprietary compost with your own made garden compost to make it go further and better.

First I used large tough black polythene bags and rolled up the sides gradually as they were filled. I made a soil mix from garden compost and garden soil with added organic fertilizer - but don't underestimate the work involved in mixing your own soil / compost and filling the bags.

Nowadays organic potato growing compost is readily available for gardeners and much lighter than soil.

Some gardeners reckon that plastic prevents sufficient air getting to the roots. Most potato grow bags are made of porous woven material and now I avoid using ordinary plastic sheet bags even if they claim to be potato bags.
I avoid clay pots not least because they are heavy and fragile.

But I don't find any problems using good light compost in these Giant Sized Potato Buckets or the Potato Success Kit.

The buckets have drainage holes an inch or so from the bottom. They can both be used for growing other vegetables such as carrots, lettuce, and broccoli.

Giant sized potato buckets are tough and long lasting. When I'm not using mine I can stack them inside each other. The bags fold away after use. But they can be in use all year around like this:-

All Year Around Potato Season.


All wrap around potato planter are a nice innovation for patios that give quick access to your new potatoes.

My first specialised potato planter was the 80 Litre Potato Growing Barrel. It's made of a flexible corrugated material with stiff sides that fold flat when not in use. The sides pull up to give direct access to the potatoes growing near the bottom. It looks attractive on the patio but a little harder to move around.
See my potato barrel with crop & potato tubs pictured above right >>

Preparing Containers And Planting Up 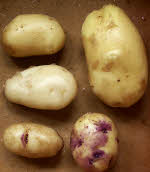 
Your nationality/region For the most useful
page links please select...

Start them inside and bring them outside when the frosty nights have finished and vice versa in the autumn to prolong the growing season. Even small 12inch containers will fill-up small gaps in your potato crop.

But for the smaller cropping early potatoes the flexibility of the potato bags, tubs and bins, is outstanding. Here again are the links to potato buckets and growing bags, and potato growing compost.

A Survivalist explains how to harvest potatoes. But only 6 tubers per plant. Avoid growing long & short season spuds in the same row.


^ Top Of The Potato Barrel